‘THE JUMPING SHEEP’ By Mwangi Ndgewa

The Maasai are a pastoralist community south to Kenya. They are known for the retainment of their culture and love for their livestock which is both a... 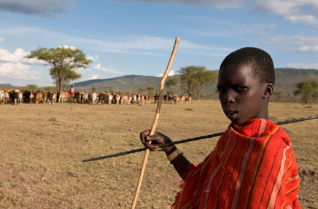 The Maasai are a pastoralist community south to Kenya. They are known for the retainment of their culture and love for their livestock which is both a source of wealth and pride. The older men and the young men are tasked with providing security to their family and searching for pasture for their livestock. The young boys usually take care of the goats and sheep whilst the young and older men tend to the cattle.

Ole Muyaa is a member of this community and when not at school, he and his age mates are automatically out tending to the sheep. Being out in the field the whole day for young boys can become monotonous and these young minds will always come up with games to spice up their day. One of the games they devised when taking the sheep home was stretching a rope along the path in front of the leading sheep. Naturally, sheep follow what their leader does. So when the first one jumps all the others follow suit. These boys did this for quite sometimes but soon, they grew bored of it and abandoned it but one thing that never stopped was this: When the sheep got to that particular spot where the rope was previously, they would still jump despite the fact that there was no longer a piece of rope.

One day, one of the elders happened to be passing by and observed that strange behaviour of the sheep. He decided to check again the following day and sure enough, the (jumping) routine was repeated. This went on for a whole week and he decided to do a bit of investigating. Upon enquiries with the young shepherds, the boys laughed and explained to him what was causing this behaviour. The sheep had jumped over the rope for so long until it was engraved in their brains such that even when the rope was removed, they didn’t realise it.

I know many of us may laugh at these sheep but we don’t realise we are also victims of something similar. When we were born, there are things that were done by our parents or indeed, grandparents and without questioning them, we continued doing things despite the fact that they were no longer valid or serving any useful purpose. Some of these have even become the stumbling block and a hindrance to our progress in life. It might be a retrogressive cultural practice, traditionally tried and tested methods of doing things, mediocre way of thinking and reasoning. These “ropes” have led to the collapse of companies and great institutions. Some promising people and business have also fallen victim to the same. It is therefore important to always ask ourselves whether the reason for doing something is still valid and whether it’s applicable and if not, let’s stop jumping over none existent ropes.To read more posts by Mwangi, click HERE