‘THE VULTURE AND THE LITTLE GIRL’ By Danstan Wasobokha

This photo of a vulture waiting for a starving Sudanese girl to die, was taken by Kevin Carter who later won the Pulitzer for this... 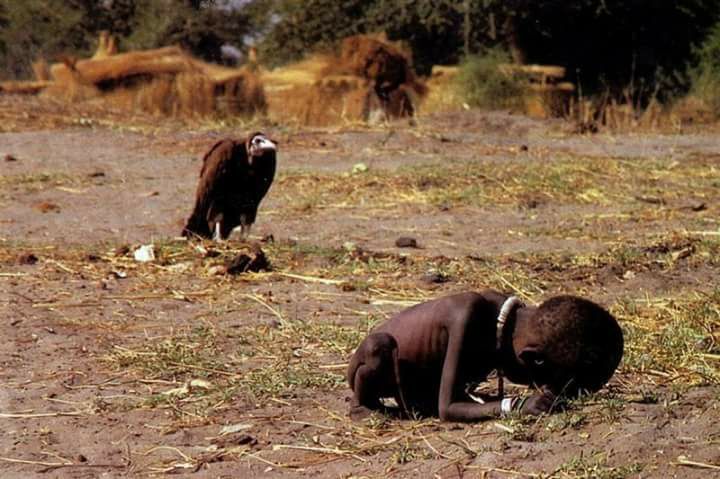 This photo of a vulture waiting for a starving Sudanese girl to die, was taken by Kevin Carter who later won the Pulitzer for this picture, but he lived just a few months to enjoy his supposed achievement because he later became depressed and took his own life.

Initially, he was actually savouring his feat and being celebrated on major news channels and networks world wide.  His depression started when, during one such interview (a phone in program), a caller asked him what had happened to the child. He replied, “I didn’t wait to find out after that shot as I had a plane to catch…”

And the person replied,  “I put it to you that there were two vultures on that day. One had a camera”.  His constant thought about that statement, led to his depression and his ultimate suicide.

In whatsoever we do, let humanity come first before gains to be made by taking advantage of unfortunate situations.

Kevin Carter could have been alive today  had he just picked up that little girl up and taken her to the United Nation’s feeding Centre where she was attempting to reach.  Prioritize people not profession, career or gains. To read more posts by Danstan, click HERE

"If you're too busy driving to stop for gas, it will soon catch up with you." Robin Sharma
Previous