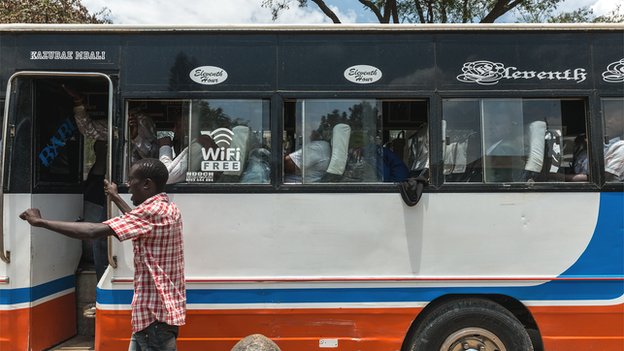 “This tout though!” said a male voice from behind me.

“Hawa makanga wamelaaniwa. No wonder wanatengeneza pesa lakini zinapotelea hewani.” (These touts are cursed. No wonder they make good money but it all vanishes). Responded the old lady seated next to him.

“Ni roho chafu wanayo. Mtu akiwa na roho chafu baraka atatoa wapi?” (They are evil hearted. When someone is evil where will their blessings come from?)”Commented the lady seated opposite.

At first, it all seemed normal until this conversation got the better part of my mind. It all started when an elderly lady on board, refused a 500 shilling note because it was tattered. She asked for an exchange of the same but the tout who had four of the same notes simply ignored her. At her alighting point, she gave the tout the note and insisted on an exchange but the tout hurled words at her and insisted she take the old one. The lady walked to the driver and asked him to help sort out this matter. The driver asked the tout to give the lady her money and went back to his business. The lady asked one last time and then walked away leaving behind her five hundred shillings.

Out of curiosity, I turned around to see the reaction of the tout. Well, he was unmoved and kept yapping on about how he was just doing his job thus will not follow a proud old lady. The driver insisted he gives the money back and thus he pretended to try catch up with the lady. A few steps ahead he headed back to the bus claiming he couldn’t see her yet we all could see the lady on the footbridge. How convenient. He hopped on to the bus and all I could hear was “we have much to do than following old ladies around. If she doesn’t want her money we may as well help her by keeping it.”

“But she wanted her money” I could hear my inner self whisper. I wanted to say something but everyone sat silently before the old man and the two ladies began speaking amongst themselves. “But tell that to him. Condemn him for his deed. “I wanted to shout out to them but still remained silent. I couldn’t understand why. The other passengers were quiet as well. Some were napping while the rest were glued to their phones, raising their heads only to catch up with what was going on. We all let that old lady down and her five hundred shilling was gone into the pockets of a greedy and mean tout.

I couldn’t help wonder. Was that their normal strategy to retain customers’ money? If he wanted to give the lady her money, then surely he could have simply exchanged it and given her one of the four notes he had? So why do that to a customer? I kept asking myself. And why were the other passengers not bothered? Was it because it was not them thus it was none of their business? If so, what if tomorrow it was them?

It is sad that in society today, if it is not happening to you, then it is none of your business. We tend to forget that it is like a line up. If it happened to your neighbour, then it is likely to get to you sooner or later if it is not stopped. It is like a virus that we all know about but choose to ignore.  Good people are suffering because they choose silence. In return, the world is suffering because of the silence of the good people. For how long will we allow this to happen?

Evil is getting its way because nobody is standing firm to condemn it. Nobody seems to care as long as it is not happening to them. We look out of curiosity and after satisfying our eyes, we ignore and move on. Are we any different then?   To read more posts by Gertrude, please click HERE

On ‘TAKING THE ROAD LESS TRAVELLED’ By Mercy Karumba
Previous