Over one 3 – day long weekend, I had the opportunity to travel upcountry with my folks. We were attending my father’s cousin’s... 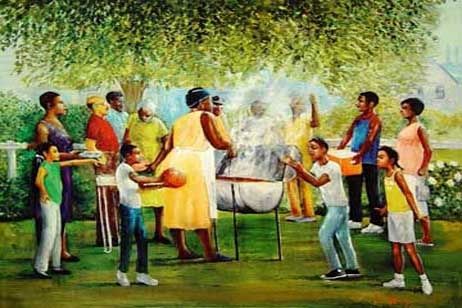 Over one 3 – day long weekend, I had the opportunity to travel upcountry with my folks. We were attending my father’s cousin’s son’s graduation party. (That web of relations is crazy…I know…)

The drive itself took us about three hours, with barely any stops as we were already running late. And so we were trying our best to catch up with time, as much as we could.

Upon arrival, we found that the celebrations were just at the brink of commencement. The turn – out was good; with a palpable sense of joy and gladness hanging thick in the air. One could feel that everyone who was there, wanted to be there because there were people from the farthest parts of the country; and judging by the positive atmosphere, it was evident that none of the guests were mildly concerned about the means by which they had travelled. We were all there to celebrate the young man’s achievements and to share in the family’s elation.

We ate, we sang, we danced, we congratulated the graduate, we celebrated his parents for the efforts they had made in bringing him thus far, and all in all, we were merry; the day was good.

One of the speakers then made a statement that really resonated with me and all who heard it. That a good child brings joy to his parents; whilst a foolish man is a sorrow to his mother. And she then asked us to reflect on this. In that particular case, the young man who we were celebrating was a blessing to his parents. And as such, the parents wanted to celebrate him, together with family and friends. An open and public spectacle.

So what am I? What are we to our parents; and to those around us? Do we fill others with delight? Or are we simply a source of trepidation to all those that know us; that are familiar with us?  Are they happy to show us off? Or would they much rather keep us hidden deep in the shadows… To read more posts by Anne, click HERE

'ARE YOU STILL AT THE BUS STATION?' By Mwangi Ndegwa
Previous