Power dynamics are at the core of all human interactions especially among men - although hidden very subtly. Ask Managers, CEOs, Politicians and... 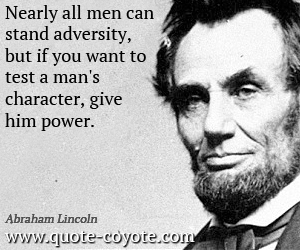 Power dynamics are at the core of all human interactions especially among men – although hidden very subtly. Ask Managers, CEOs, Politicians and they will quickly downplay their desire for power. Instead, they will admit knowing others who are power hungry but that they themselves are doing it for nobler reasons; for the good of society, to improve efficiency or outcomes in a particular industrial sector, to better life for those in society etc. However, deep down, they relish the power derived from these positions of influence.

In any group of men (social or otherwise), men are always seeking to establish dominance and install oneself as the alpha Male. They size each other out and establish for themselves a hierarchy of operation. In the event of disagreement, rival groups collude to ensure they benefit the most from the level of influence they command, hence office politics or politics at large.

The extremes men will go to in the pursuit of power vary by personality and the functional structures in a given society yet you will never hear anyone admit they possess autocratic or dictatorial tendencies. The narrative is always that they are out to serve people, even where remarkable evidence proves otherwise. Soon after things fall apart, and megalomaniacs are overthrown, they will still want to attest that they left on their own terms e.g. Uncle Bob as we have recently seen in Zimbabwe.

In Kenya, we have heard remarks like “I’d rather die than resign”, “We will use all means humanly possible…”, we’ve seen power seized by all means possible no matter the cost of dehumanization perpetrated on the citizens. What is thing about power that men love so much?

In life from the minute he sets out, he is determined to prove his prowess. In relationships, he wants to be the provider and protector and that gives him a sense of pride and satisfaction, failing this, he feels emasculated and the relationship goes through a very rough patch.

Well, I guess we men are innately political beings. We only need to ensure as we embark on this supremacy games that we protect the dignity of others. I wish you success in all the battles that you sign up for. Until we speak again, I am your host Mitchell Odhiambo. Welcome to a man’s world.  To get a female perspective on this, please read Mercy’s article HERE