While writing this, I was seething with anger over the team that I support whole heartedly. Losing points at the hands of a team... 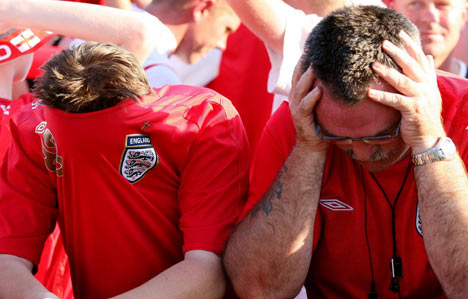 While writing this, I was seething with anger over the team that I support whole heartedly. Losing points at the hands of a team that was supposed to be put to the sword is really depressing. Let’s call my team ‘the A team’ versus a certain team that should have been put to the sword, let us call the other team B.

One of the main reasons for concealing the teams name’s is writer’s should try their best to be unbiased and try to be as neutral as possible (or so I am advised), but writer’s are humans after all and feelings are always there come rain or shine unless you are a stone from the grand canyon.

This is obviously not the first time I was hot under the collar. I dislike this feeling because it’s a reminder of how emotional I can get and how football has a hold over me and my life. Things should never be this serious especially if the thing that causes such a roller coaster of emotions is a football team.

A football team that doesn’t know who I am, that is not in my home town (which happens to be thousand of miles away separated by a large mass of water called an ocean) and a football team that I do not own and do not have shares in. Of course football is a source of entertainment and livelihood for some but it shouldn’t turn sour to the point of not being able to sleep at night and being harsh to others around you just because you didn’t win. Some have even taken their lives because the football team they support lost certain games. However sad this is, it is true. Being mad and disappointed is okay but not to the limit of taking your life and leaving your loved ones behind: from your parents to maybe your children and wife.

So, if you are a true football fan and become infuriated at your team and have those sleepless nights, just remember that team and the whole of the Club’s staff don’t know you and won’t even bother about you. So don’t go over and beyond and become so sad that it takes over your whole life because after you pass on, the club you once supported will continue playing and win or lose with or without you. So get mad and disappointed but not to the limit at which it disrupts your day to day activities. Not showing up to work because Arsenal won the league – I know this is really hard for football fans to conjure up. If this ever happened the world would be in turmoil just because Arsenal’s fans might not go down well with your boss. Written by Eddie Mukisa

Planning Ahead By Mwangi Ndegwa
Previous

Wellness Wednesday By Patricia Mollyne Mataga 'Know When to Talk and When to Listen'
Next
Loading...
Loading...