‘A BIT OF COURTESY WON’T HURT’ By Mwangi Ndegwa

This is a story I  shared a while back which I would like to share again.     Bob the matatu driver... 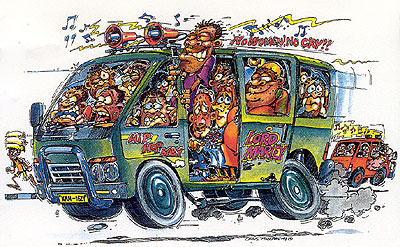 This is a story I  shared a while back which I would like to share again.     Bob the matatu driver was on his third trip or “squad” as they call it in the matatu lingo. His minibus was the talk of town, what with its beautiful graffiti, flashing lights and state of the art music system. When leaving the house, he had left his ailing mother with a promise that after he was through with his shift, he would take her to hospital. He had done his calculations well and he knew that by one o’clock when his shift ended, he would have made enough money for his mother’s medical expenses. This was his plan but as he was busy at work, things were going awry at home. His mother’s condition had deteriorated and his wife had rushed her to a nearby clinic. The medical officer in charge had referred them to a more advanced hospital and due to the critical condition of the old lady, they had procured the services of an ambulance because any delay would have been fatal.

It is at this juncture that Bob did something that he would regret for the rest of his life. He was on his last trip of the day and was cruising from town to the suburbs when he saw an ambulance at a far off distance with its strobe lights on and the siren blaring. With the arrogance so common with public transport drivers, Bob refused to give way even rudely retorting that some of the emergency vehicles use their right of way to escape the traffic jam or to transport illegal drugs. Finally, the ambulance was able to manoeuvre its way out of the jam and cruise off to hospital. This delay proved to be very costly because Bob’s mother was pronounced dead upon arrival with the doctor telling them that had they arrived ten minutes earlier, then they could have saved her life. This delay happened to be the duration that Bob and his ilk had refused to give way to the ambulance. After he had handed over the vehicle, he rushed home only to be told that his mother’s condition had deteriorated and she had been rushed to hospital. Without wasting any minute, he rushed to the hospital only to find his mother’s body being wheeled to the mortuary. On enquiring further, he was told that the ten minutes delay that the ambulance had encountered, had led to all this and that is when reality hit him like a thunderbolt. He had, through his arrogance and lack of courtesy, caused his mother’s untimely death.

How many times do each of us refuse to bulge or even give way citing that we have a “right of way”. How many times do we see traffic snarl ups on our roads simply because we have thrown courtesy out of the window and we cannot let anyone drive ahead of us irrespective of the traffic rules. So many of the unwelcome things that happen to us can be avoided, if we learnt to be more courteous. As such, purpose to let a sick, expectant, physically challenged or old person go ahead of you in the queue. You may have gotten there before them but it will not hurt you and in fact, will make that person’s day and who knows, it may be that small gesture that all society needs to trigger off a positive revolution in our behaviours. Allow me to quote a slogan that was used some years back by the NRSN (National Road Safety Network) “A little courtesy on the road won’t hurt.” I will paraphrase it this way” A little courtesy in our day to day life can save a life.” All the best as you practise being courteous.  Click HERE to read more articles by Mwangi.