Emily is a beautiful, young, lean American lady with deep thoughts and a slender body. I was told we have two things in... 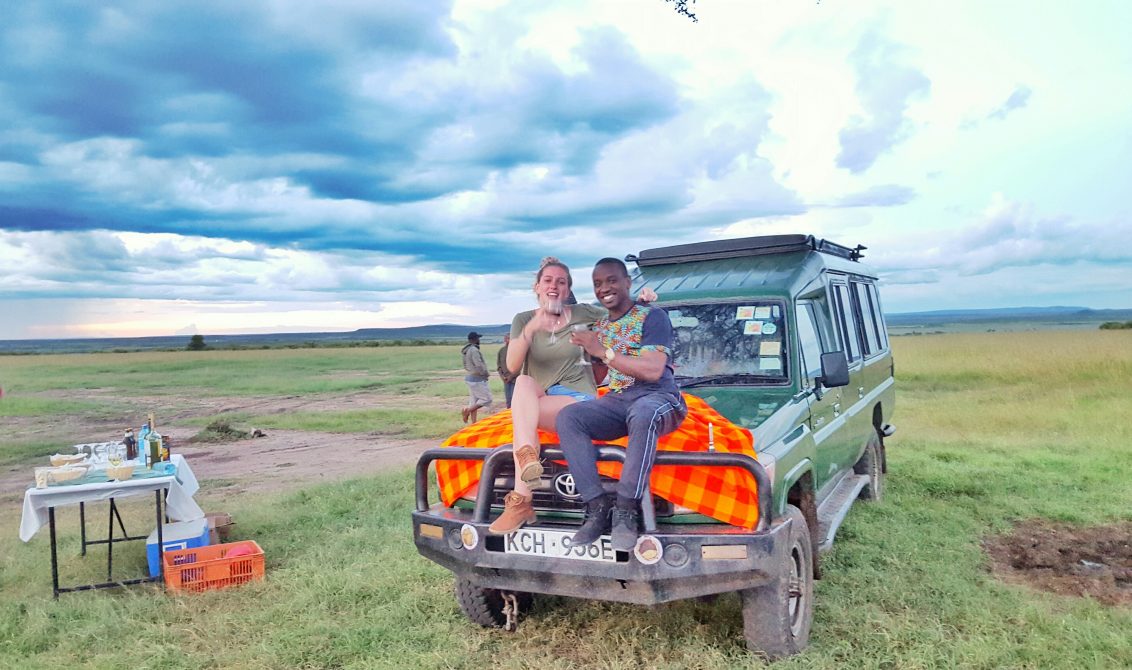 Emily is a beautiful, young, lean American lady with deep thoughts and a slender body. I was told we have two things in common; a magnanimous heart and a crazy love for heavy engine vehicles, precisely the Jeep. We both have Jeeps. Hers is matte-black, Rubicon Convertible Jeep Wrangler SUV. I’ve forgotten the specifications of mine. I see it in my dreams but wake up when all the details are lost. Anyway, during our  safari, Emily asked me, ‘which animal best describes you Danstan?’

‘Lion!’ I replied Zealously, ‘if all you did was sleep 18 hours a day, had plenty of sex and did very little by way of chores (i.e hunting), life shouldn’t seem too bad.’

‘So why are male lions so grumpy?’ she said as she watched this cub from a male’s pride inched up nervously to him on the unlikely chance that he might be willing to engage in a little play fighting. Instead he was greeted with a loud growl with a clear message: do not disturb. However, so stunning was the male in appearance that it was easy to forgive his faults with the blowing wind emphasizing his magnificent mane. This was just a video clip we were watching.

We are in the open-sided vehicle with a wrap-around panorama that extends all the way to the blue-grey shoulder of the Oloololo Escarpment. We’re driving through one of the dozen or so conservancies that borders the famous Maasai Mara National Reserve. Here, where the rolling plains are known as the Maasai steppe, the land still belongs to their ancient guardians, the Maasai, and  a 360-degree scan reveals not a single other vehicle in sight. And herein lies the magic, because where the conservancies score over the national parks is by being able to control the number of vehicles allowed on to their land. And this delivers two great advantages – firstly the wildlife itself is less harassed and therefore more relaxed, and secondly, we have it to ourselves.

It is our third game drive and we’ve already ticked some of the ‘Big Five’ boxes. But the lion is proving elusive. No matter: there are other sites to see. ‘Hippos!’ says the driver suddenly. He points to the river, which has been snaking alongside us for the past few minutes. Its banks, steep and muddy, are hard to see over. So we draw up close. The water is chocolate brown and flecked with creamy foam. There are whirling eddies in the water, but no sign of hippos. Until, that is, you look more closely. Then you see the round raspberry-pink ears. As we watch, an enormous head emerges from the water and splits open into a pink-lined yawn set with huge, ivory-yellow teeth. Following their leader, the rest of the hippos rise from the water to survey us. Amazingly, the river has concealed around twenty of the huge beasts. One has a coronate of weeds on its head.

Letting in the clutch, the driver eases the heavy safari vehicle back on to the track, which winds its way back on to the savannah. The light is fading now and the activity on the plains is picking up pace. There are great herds of wildebeest that cavort and skitter as we pass. Zebras stand tall to nose and stamp their feet. Plum-colored topi perch atop termite mounds and survey their territory. Antelope flick their striped tales and emit their warning ‘zick zick’ as we pass. And a pair of ostriches are having a flouncing mud-bath. We’re traversing a small valley. A couple of old Buffalo bulls, their great bossed-horns lowered, are meandering through the low, shrub. We halt for a photograph.

And then we see, something very large and golden, lying at the bottom of the little glade. It is very still. So still that someone suggests it’s dead. The driver laughs. ‘Better not investigate,’ he says, ‘You’ll regret it.’

The lion is lying on his back, his great paws clutched around his snout and his pillowed on a clump of bush. He’s fast asleep with his back legs splayed and his creamy-white underbelly exposed. He seems beguilingly defenseless: a huge, almost tickle-able kitten. The tip of a pink tongue protrudes from his muzzle. ‘The pride must be near,’ says the driver. ‘He is digesting. But the lionesses and cubs may still be eating.’ These driver-guides know their wilderness. Or better put, we Africans know our animals. We know our lions.

We don’t have far to go: a few hundred meters away, on a stretch of khaki-colored ground above the river, there are two lionesses. One is suckling her three cubs. The other is sleeping: or trying to. A pair of older cubs scramble over her rib cage. They’re mock fighting, batting each other with tiny paws and snarling to show miniature teeth. The lioness raises an idle paw to swat them away and they roll away fused into a furry ball of paws, claws and tails. In the foreground is the half-devoured carcass of a zebra. Its ribs, chewed clean, are stark white and its yellow teeth are barred. Lionesses and curbs alike ignore us. ‘Can you see the other lion?’ the driver asks casually. The other lion?

You’d think a lion would be hard to miss, but such is the camouflage of pale yellow fur against dense thickets of long dry grass, that it takes a while to locate him. Languidly, he raises to his feet, yawns, swings his dark-brown tasseled tail to and fro and emerges from the thicket. Fully revealed, he’s twice the size of the lionesses. And he’s walking very deliberately in our direction.

There’s a communal intake of breath. The vehicle is open sided. Now the lion is a couple of meters away: less. There’s a swagger and swing to his walk. But we’re too awed to reach for our cameras and record it. For a split second he looks our way. The amber stare is chilling. Then he changes direction, pads away into the long grass, and disappears from view. But he has made his point.

It’s not until you see a lion in the wild that you appreciate its sheer glorious majesty. And it’s not until you engage that impetuous yellow gaze that the ancient race memories resurface. And then the fear kicks in. And it kicks in HARD.

“Very softly down the glade runs a waiting, watching shade; And the whispers spreads and widens far and near; and the sweat is on thy brow, for he passes even now –  It is Fear, O little hunter, it is Fear!” Rudyard Kipling

I feel this fear to date, when I try to comprehend the fact that my teenage son and daughter might never have such an opportunity to experience such a profound wonderment of seeing such majestic, magnificent animals yet so full of serenity. Within the next two decades, there could be fewer than 10,000 lions across the world. The wild lion population is in rapid decline due to matters that we can control; conflict with people. Decline in natural prey. Increase in lion bone trade. Loss and conversion of habitat. Trophy hunting.

When the last tree is cut down, the last fish eaten, and the last stream poisoned, only then will we realize that one cannot eat money.

Maybe it won’t be as bad anyway. Maybe we’ll be able to create better lions by putting on make up and posing in the jungle as well-cultured lions. Dear future son and daughter, brace yourself for pink-mouthed lions. To read more posts by Danstan, click HERE

On 'DO YOU HAVE A TROUBLE TREE?' By Mercy Karumba
Previous