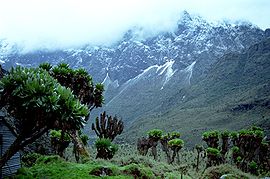 The Ruwenzoris are mountainous outcrops found in the western part of Uganda, a country found in the eastern part of Africa. It is slightly 4000 meters above sea level and due to its height, its upper part is partly covered in snow. Surrounding these mountains are some lush green fields fed by water from the rains which are  a  normal occurrence. The mountain is loved by health enthusiasts who like to test themselves against nature’s finest.

Weekends see the highest number of tourists who love to hike up there to enjoy the views and the cool, crisp, fresh air. This is where Mutesa was born and brought up. He had elder brothers who used to do excursions up the mountain and the would come back with wonderful tales of their experiences up the Ruwenzoris. He desired to go with them but the sheer height of the mountain frightened him and taking into account his young age, his brothers would not allow him to accompany them. This left him crest fallen but he continued nursing ambitions of one day hiking up to the highest peak.

Mutesa embarked on a very rigorous program of exercising to make sure that when D day came, he would be all ready and set. The day finally dawned. It was after he was through with his secondary education that his brothers finally decided he had come of age and they decided to include him in their excursions. He was besides himself with joy that finally, his dream of conquering the great Ruwenzoris had finally arrived. The excursion involved camping at the last stop on the trails and then summiting the following morning at sunrise.

On the appointed day, they packed their bags and hiking gear and off they went. The trail was nothing Mutesa expected. It was steep, muddy, narrow and very treacherous. In some areas, one had to literally used their hands to climb up. But this did not dampen his spirits. The expected experience ahead was worth every drop of sweat. They finally made it to the camping site, tired but happy. They hurriedly prepared  dinner and after eating, they got into their sleeping bags and within no time owing to the fatigue from climbing, they were all asleep. Mutesa could not sleep well and he kept waking up at night. He couldn’t wait for dawn and when finally his brothers stirred, he was the first up. After breakfast at around 4am, they started their final accent. Finally at 5:30am, tired but happy, they made it to the summit just in time to witness the beautiful sunrise. Mutesa could not contain his excitement for he had finally fulfilled his mission. He couldn’t understand how the mountain looked so small from the peak compared to what he was used to see when viewing it from home.  His elder brother explained to him that the difference in altitude made the view from up the mountain different from down the mountain.

There is a simple lesson that we can draw from this analogy. Life is like a hike up a mountain and each is at a certain point along the journey. Sometimes we come across challenges which seem insurmountable. These are usually the defining moments in our lives. Our attitude towards the challenge determines whether we forge on or, throw in the towel and go back. Some will sit down at the point they encounter the challenge and stagnate there. If you view the challenge as a problem, you will easily give up but if you view it as an opportunity, you will work hard, in whatever endeavours you are involved in. I conclude with these words from Zig Ziglar “Your Attitude not Aptitude will determine your Altitude.” To read more posts by Mwangi, click HERE