‘LEARN WHEN TO WALK AWAY’ By Mwangi Ndegwa

The Aberdares is a mountainous range of hills with different heights above sea level. They are situated in Kenya, about seventy kilometers west of the Kenyan capital,... 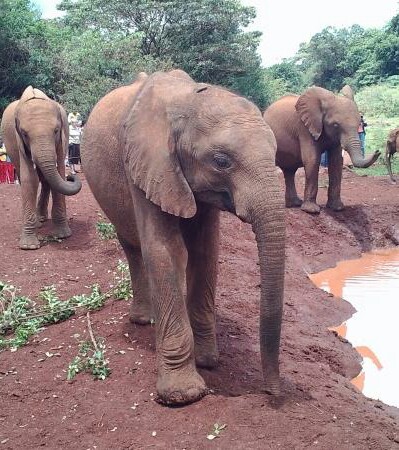 The Aberdares is a mountainous range of hills with different heights above sea level. They are situated in Kenya, about seventy kilometers west of the Kenyan capital, Nairobi. The area is covered in thick vegetation ranging from short shrubs and creeping plants to huge indigenous trees, some over a hundred years old. The rains are always in abundance and this gives the vegetation perfect conditions to grow very fast. Deep in one area of this forest, is a very strange phenomena. The area is quite vast and you find some form of gas bubbles oozing from the ground.

Ndovu the elephant was born a few kilometers from this area. As he grew up, his adventure spirit started stirring inside of him. He loved to explore various areas of the forest though he never ventured very deep into the forest, for fear of losing his way. The forest was very unforgiving and there were so many paths crisscrossing each other and if you missed a turn, then you would be lost in the endless maze of paths.

As Ndovu grew older, he became more experienced and this gave him more boldness and courage to venture deeper into the forest. He also made many friends and one of these was Njiwa the dove. As a bird, Njiwa could cover vast areas of the forest without fear of getting lost because he could easily locate his home from the air. He could bring tales of the areas of the forest he visited and this always pricked Ndovu’s curiosity. The tales become juicer by the day but the one that burst the seams was of that “strange area” which Njiwa described as a huge farm of bubbles. Ndovu could not understand how air could come out of the ground and yet there was nobody blowing it through. He promised himself that he would pay that area a visit. When the day he had set finally arrived, he sat with his friend Njiwa and explained his intentions. Njiwa was very helpful and gave the directions and all that he required. But Njiwa sent Ndovu on his way with a warning, not to get too close to these fiends of bubbles or stay too long, because anybody who dared do this never left the place alive. What most of the inhabitants of this forest didn’t know, was that this area was a natural carbon gas producing area and long exposure would lead to oxygen deprivation and the subject would collapse and die.

So when the day of his excursion came, Ndovu was up and early, packed his provisions and set out to make the discovery of his life. He made good time and at exactly noon, finally arrived at the place of his imaginations and it was no longer an imagination but a reality and true to Njiwa’s warnings, there were so many carcasses of birds and other animals. Ndovu’s curiosity got the better of him and despite Njiwa’s warnings still ringing in his ears, he started venturing closer and closer to the bubbles. He managed to cover only five meters inside before he started feeling dizzy. He tried to rush out but his body was slowly shutting down caused by the inhalation of the toxic gas oozing from the ground. He collapsed before he could walk clear of the toxic area. His friend Njiwa knew that Ndovu was a very curious character who could push his luck to crazy levels. With this in mind, Njiwa had alerted Ndovu’s parents of his excursion escapades and explained everything including the risks involved. So immediately Ndovu left in the morning, Ndovus parents gathered some scouts who were conversant with the forest and they followed him, albeit from a distance so as not to alert or alarm him. With Njiwa’s excellent navigation skills, they located the area five minutes after Ndovu had arrived. Njiwa’s sharp eyesight helped them locate Ndovu where he had collapsed and lay motionless. They quickly donned gas masks and rushed into the gas field and carried him to safety. One of the rescue team members was a medical physician and once they were out of the danger zone, he set out to resuscitate him. The damage was quite severe and Ndovu was admitted to hospital with partial brain damage.                                   *********************************

Many of us today are in a similar position as Ndovu. We associate with people who we clearly know are toxic to our lives, businesses, marriages, studies, or even our social lives. These may be family members, relatives or close friends. Some have had such  negative impacts on our lives and because we don’t want to offend them, we sit around and inhale the  toxic emissions which are in turn, slowly killing us, our dreams, visions and aspirations. More often than not, we know that we are supposed to walk away and yet we wait until that person’s toxic fumes finally poison us leading to the total collapse of our lives. Few of us have clearly demarcated boundaries and those of us who have them, don’t have strict adherence guidelines. We are so lenient to the point that these boundaries become irrelevant.

Our conditions in life will rise or fall in accordance with the people we choose to associate with or the networks we have. Many if us will have friends or family like Njiwa, who warn us in advance, but often, we ignore them assuming we know better.

So, before you allow anybody into your personal space, it is important to first get to know them well and their priorities in life. If we feel they are adding no value, then we should unapologetically walk away. There is no point allowing somebody to mess your mind and life in the name of keeping friends. Learn to know when to walk away. To read more posts by Mwangi, click HERE

IS THERE A COW IN YOUR LIFE THAT IS KEEPING YOU MISERABLE? By Mercy Karumba
Next
Loading...
Loading...