The Trojan Horse is a term that is often used in our daily dealings. Its origins date from ancient Greek mythology. It is... 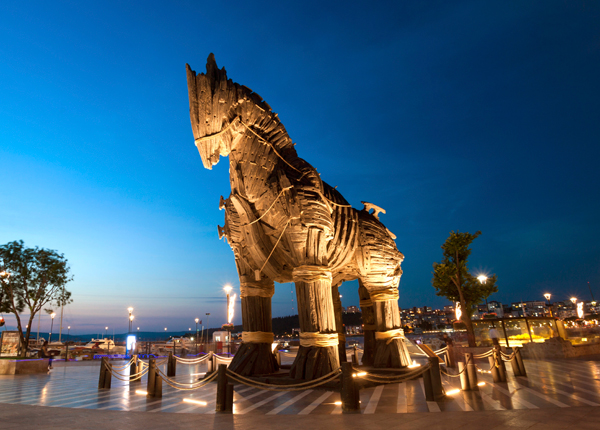 The Trojan Horse is a term that is often used in our daily dealings. Its origins date from ancient Greek mythology. It is unknown whether the Trojan horse is fact from the fabric of history that is the Bronze Age, or whether it is just a fable that has been sewn together by people (the Trojans) of those time; perhaps as a justification as to how they were invaded by the Greeks.  So here goes the story.

The war is said to have begun after the abduction of Queen Helen by the Trojan prince. Queen Helen was the wife of Menaleus, whose brother was King Agamemnon of Mycanae. Jilted and driven mad by this act, Menaleus convinced his brother to lead a raid on the Trojans to lay them waste, and retrieve his wife.

The battle lasted over 10 years, and was marked with countless deaths from both sides; with the Greeks trying to breach the extremely high perimeter fences that the Trojans had built around themselves. This gave them an excellent vantage point, from which they rained arrows down on the advancing Greek soldiers.

Seeing no end in sight, the shrewd Greeks came up with a ploy; a stratagem so deceitful that it would transcend through-out time and history as a warning to all.  So they got their most skilled carpenter to build them a huge and magnificent horse; beautiful on the surface, deceitful at heart.  But it would be a hollow horse, with a number of the best Greek soldiers safely tucked inside.

So the Greeks ‘sailed’ away, and left the horse at the entrance into the Trojan city, with an inscription at the foot of the horse, with the words, ‘For their return home, the Greeks dedicate this offering to Athena.‘

Come night fall, the Trojans saw that the Greeks were no longer and went out to the horse. Awed by its beauty, and the apparent sign of defeat of the Greeks, they pulled it into their fortified city, and celebrated late into the night. Getting drunk on cheap liquor.  Tired, drank and lulled into a false sense of euphoria and victory, the Trojans fell asleep.

At this point, the Greeks who were within the belly of the horse, emerged and opened the gate into the city. And alas, other Greek soldiers who had sneaked back into Trojan territory lay in wait. They invaded the city and tore through it; killing everyone in sight…..and that marked the end of that great battle.

What we learn from this is to always be vigilant; do not allow yourself to be hushed into a false sense of security, only to have that thing come round and do you harm. To read more posts by Anne, click HERE

SPECTATOR'S SHOUTS OR THE GAME? By Mwangi Ndegwa
Previous