‘The Chrome Experience With Sauti Sol’ By Angela Mugo

Last Wednesday, was one of those dull afternoons. I had just had more lunch than I should have (greed having gotten... 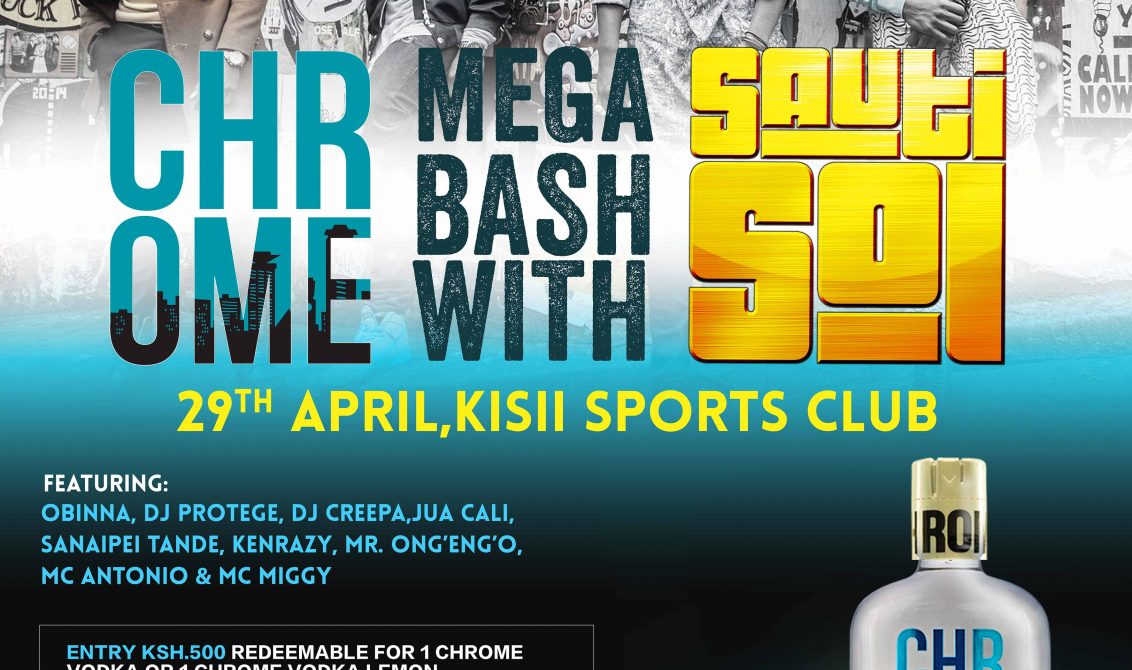 Last Wednesday, was one of those dull afternoons. I had just had more lunch than I should have (greed having gotten the better of me), so I was just sitting at my desk, basking in the shame of my gluttony. I should have been working but I was not;  yet I had so much to get done. So I glanced at my email and came across an email (from AfricaTalentbank.com (ATB), inviting me to the Chrome Mega Bash with Sauti Sol in Kisii.

At first I was hesitant, after all, it was going to be a long labour day weekend and so the lay-about  in me wanted to lie in bed all day and catch up on my favorite series. However, I had recently promised myself that I was going to do things that were not the norm for me – get out of my comfort zone, as they say. So, with this very sound and amazing argument still resonating in my head, I took a leap of faith and expressed interest in attending this concert.

Fast forward and three days later, I am sitting on a bus en route to Kisii. It was a six hour journey through which I barely slept. I was in the company of my good friend who is a fireball of energy. Throughout the trip we chatted about our past, our present and our aspirations. There is something about traveling in the dark, with the open road ahead of you. It opens you up, you feel free; like anything is possible. It was quiet, except for the calm purr of the engine. I could have slept but I was scared I was going to miss out on the beauty that was this experience. It was one of those very cold nights when you can barely feel your feet. The night was mildly starry. One moment it was us traversing the vast narrow plains, then the next, the hilly beauty that is the Rift Valley. I dare say at this point, that bus ride stands as the most therapeutic thing I have done this year. It cleared my head, put things into perspective and helped me spark a terrific new connection.

We arrived at Kisii a little late. The moment we got off the bus, a very friendly taxi driver approached us and offered to drive us to our destination. In his car, he was playing soft rhumba music. He was a young guy and I was surprised he was not playing the madness that is today’s music. I became curious about this and asked him whether it was a cultural  thing. He told me that he played the music to remember his late grandfather. His grandfather played this music when he was growing up and it’s what he left behind for him when he passed away. He told us he owned his late grandfather’s phonograph and it was his most valued possession. When he played this music, he felt just like a young boy again, sitting on his grandfather’s knee. Talk about starting an experience in an amazing way. I was already taken by this place and it’s amazing cab driver.

We arrived at the venue a little after midnight. You know that feeling you get when you finally find a friend in a huge crowd of people?  That’s what this felt like. It was beautifully lit and the ambiance was amazing. There were all these people having a good time. From afar, it seemed like they were all millennials. However, upon closer inspection, I realized this group was very diverse in age and that just having so much fun, made everyone look so young (or was this the Chrome speaking?

There was someone on stage performing. I first noticed his trousers, they were black with yellow cartoons. When he jumped up and down, his presence seemed to fill the whole stage. He was alone but it felt like there were a hundred people on stage. It was beautiful. I was escorted to a seat that I did not sit in for more than ten minutes, I wanted to get up and experience the energy, feel what everyone who was on their feet was feeling. Kenrazy did a great job.

Then the mc’s of the evening came on stage. They were the funniest duo I had met in a long time. Their jokes were tasteful yet hilarious. They danced to any music effortlessly. Speaking of which, I should probably mention the DJ. I feel like the tone of any event lies in the hands of the dj. This guy must have had gigantic hands because he carried the event with him effortlessly. He elevated the mood to the point where everyone was on their feet then brought it down to people listening to him, then took us to another place where we were all thoughtful. The next act was Nameless.

Nameless, he is the sweetheart of the 90’s kids. He is the guy whose songs filled our song books. I remember singing to his tracks when I was a small girl. I was excited to see him perform live. He however, took my expectations, squashed them and did more than I expected. Nameless was backed by two beautiful dancers. From the moment he stepped on stage, I felt like I was ten again, waiting eagerly for the Sunday pull out called ‘buzz’. He smiled as if to take in the whole crowd then started to belt out a beautiful track. This man has amazing vocals. This song transported me to another place. Then there was the dancing, he moved so effortlessly on stage. He pulled in the crowd by easily instructing them on how to dance. He made eye contact with the crowd. If you asked, I would tell you that Nameless was performing solely for me. This guy has mastered the art of performance and it is beautiful. Despite his squeaky clean public image, he is anything but boring. He surprises you on stage, constantly takes your breath away. His performance must have lasted at least an hour long, although it seemed only 15 minutes owing to the amount of fun we were having.

All this while EABL were taking great care of us. They had beautiful hosts dressed in red. Let me paint you a picture. Imagine a lady, dressed in red standing with a nice bottle of vodka. She smiles at you easily and asks whether you need anything. You tell her you would like some bitings. She disappears for a few minutes and before you know it, she is by your side with a beautifully set plate. It has sausages, samosas and some greens. The plate looks beautiful but the service is even better. You want some water but you are worried you might have been too much trouble, so you look at her shyly then look away. She asks if you are sure you don’t need anything else, you take the chance and run with it. You ask for a glass of water and off she goes with that beautiful smile of hers and brings you the water you desperately need. That’s how the service was, there were all these amazing and pleasant hostesses. The event organizers sure did a good job with this.

The highlight of the evening was Sauti Sol. This boy band we have come to love so much. They built the suspense up so much. When they finally stepped on stage, it was amazing. First, Polycarp stepped up on stage with a bass guitar. It was beautiful, the way he worked his magic. You could hear yourself breath were it not for the sound of his guitar. He played it with so much gusto, when Polycarp played; the guitar was him and he was the guitar. This was breathtaking. Before  we could even recover, everyone else joined in and they were all on stage, in all their glory. Have you ever eaten ice cream, then you got greedy and had too much at once? The feeling of brain freeze, that’s what this experience was like. They started off slow with the crowd dancing slowly to their music. They then kicked it up a notch and suddenly we were all in the air enjoying the music. Sauti Sol’s performance was easy but exciting. Their vocals are beautiful and articulate. The ambiance of their performance was sophisticated. The stage was dimly lit with their silhouettes as the highlight of their performances. They danced slowly yet beautifully.

I could go on and on about this beautiful experience but I worry I might start to sound like a broken record. I will therefore stop there and ask you to join me for the next concert EABL does with Sauti Sol.  You only live once, you better make it count. I bet part of making it count includes seeing Sauti Sol in concert while enjoying a Chrome and getting pampered by EABL. See you soon! If you enjoyed reading this, click HERE to read my colleague Danstan’s take on this fabulous evening.