FEMALE PERSPECTIVE ON ‘MEN AND HOUSE CHORES’ By Mercy Karumba

I was once watching TV with a friend of mine when all of a sudden she exclaimed,"Why is it that in Kenya, most commercials about... 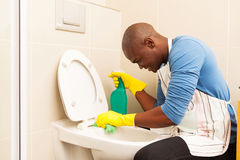 I was once watching TV with a friend of mine when all of a sudden she exclaimed,”Why is it that in Kenya, most commercials about detergents, cleaning agents and baby care are played by women and mostly targeted at women and mothers? Does this mean this is not a man’s job?”

I was actually perplexed and at the same time, realized how much it has never been an issue for me.We had a really deep discussion on the same and we realized that for a long time, child care and house chores have been assumed to be roles for women.

During courtship and the first year of marriage, it is surely normal to see team-work in the house with both the man and woman doing chores? I just don’t know what happens when kids arrive and yet that is the time when chores become overwhelming for the woman. Interestingly, it becomes very common to see the team-work return once they become an elderly couple and they are ageing together. It’s such a sweet moment actually as most times, it is the man doing most of the chores.

Most couples will surely relate with the fact that a man will wash dishes and will make everyone know that he has washed dishes that day, especially rubbing it in, on the wife and feeling very proud of himself  Not that its not you know, but why is it such a big deal when she does these same chores all the time but doesn’t talk about it?

Yes, it is good to define gender roles, very crucial actually, but let her feel your companionship when it comes to house chores. Just to be fair, as women, driving the family around is also housework so your man is actually doing something behind the wheel if you are keeping tabs😋 To get a male perspective on this, click HERE