On ‘THE MIDAS TOUCH’ By Anne Gathoni

Midas touch: In the modern world, the term is more often than not, used to refer to an uncanny ability to make money... 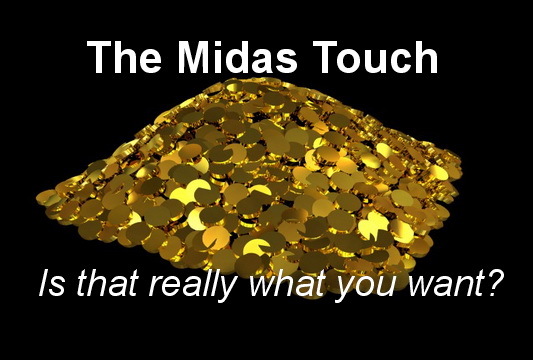 There once lived the King of Phrygia, Midas. Over the vast deserts, he was the wealthiest man that lived, and he had a sweet and lovable daughter who was called Marigold; so named after the alluring, orange coloured flowers that span across his vast garden. In spite of all that he had, he still craved for more. Gold was his poison; his breath of fresh air; and he was willing to do anything to have as much of it as he could. No, beyond that. He wanted more gold than even he could ever dream of. And believe me when I say, he had already dreamt up a whole lot.

And so one day, while marveling at his ponderous amounts of gold in his towering gold room, a fairy appeared to him, and said to him, ‘Midas, you are the richest man in the world. If I were to grant you one wish, what would it be?’ Without so much of a glimpse of hesitation, Midas answered, ‘I would like for everything that I touch to turn into yellow gold! ’

‘Are you sure?’ the fairy asked.

‘Yes I am. That is what I desire most in this world,’ answered Midas.

And so his wish was granted. As the butterfly emerges from its cocoon, transformed and whole, so did Midas feel; as though he was finally whole. Eagerly, he touched the floor and immediately it turned into gold! Everything that he laid his hands on, instantly turned into a rich gold; the colour of absolute and immense wealth. King Midas’ heart almost tore at the seams with glee.

After turning all the rocks in his garden into gold, so that even the sun’s rays upon the sea of gold, cast a glare so strong that even the blind could see, he went in to eat. However, upon touching the cup that would put him of out of his thirst, it turned to gold. He touched some bread, again it turned into gold. The meat turned hard, and shiny, flashing up at him maliciously, almost as though it weere taunting him for his foolish decision.

Seeing him so distressed, Marigold went up to her father, to comfort him. No sooner had he touched her rosy cheek, than it turned into an unsympathetic glint of gold. A great fear overcame him, and all the joy that his precious gold had brought him was swept away in a flood of pure anguish and torment!

He called on the fairy who had granted his wish, and begged him to give him his daughter back; his fountain of joy.  The fairy, on seeing his agony, told him how he could reverse what he had done.  Ambition is encouraged as it only makes us better; but without its limits, it turns into rapacity. To read more posts by Anne, click HERE

On 'What does love mean to you?' By Mercy Karumba
Previous