‘ON A QUIET PEACE’ By Anne Gathoni

Tuesday the 8th; the most anticipated date on the Kenyan calendar this year; to all Kenyans, within and without our borders. The day... 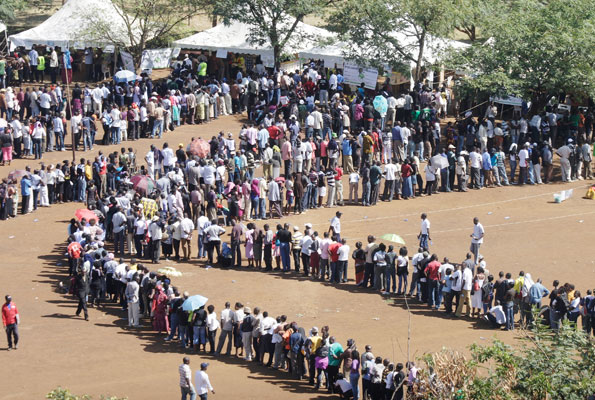 Tuesday the 8th; the most anticipated date on the Kenyan calendar this year; to all Kenyans, within and without our borders. The day we get to elect leaders who will be at the helm of our country’s ship for the next five years.

So we wake up, quite early (might I add), in silent triumph patting ourselves on the back, thinking we would be the early birds to catch the worm; only to hear that were those who had quite literally camped at polling stations and that long queues were already forming.

We hastily get dressed, dorning ourselves with heavy clothes, in defiance of the low hanging clouds bedecking the sky and together, we march out into a cold blanket of mist that had descended. The sun is barely visible, its orange hued rays trying to penetrate pierce the veil.

My brothers and I are quite noisy on our way there; perhaps in a bid to chase away the cold, or maybe as an escape from the daunting fact that this day was going to be a course-altering one for our nation. At the polling station, we are met by yet another unwelcome sight; throngs of people standing patiently in queues that snaked across the entire barren compound. And like sheep out to the slaughter, we silently make our way to our respective queues, with a final nod to each other; a smile, not only of familial bond, but also one of a patriotic bond.

In my queue, I stand alone. A few familiar faces warm me as we hail each other with broad smiles. But for the most part, I keep myself occupied with social media; so many memes are already trending, with updates from across the country flooding in from all fronts. More and more people trickle in, and the queues get steadily longer; apparently the rate at which people are coming in, is higher than those going out.

Two hours later, I finally get to the front, ID in hand. My stomach at this point is an unwilling participant in this exercise, grumbling and rumbling up at me in riot. Ignoring it, I get my fingerprint scanned and am shown to the next clerk. I receive my six oddly but brightly coloured papers and head on to the polling booth, my heart thundering in my chest. For somebody who wasn’t exactly new to the process, I sure was nervous.

‘Booth’ in this case is a term I use in the slightest of terms. A more apt description would probably be, a huge carton box with one face cut in half and forced to be the ‘table’. It, however, serves the purpose; enveloping me in the privacy of my thoughts. Pen in hand, I draw crosses on my candidates of choice; a cross to carry the weight of my support for them.

Once done, I drop them off at equally bright boxes, each clearly marked, its colour corresponding to the ballot papers. I had initially tittered at those who had gone ahead of me for not being able to match the ballot paper with the ballot box, colour blindness; and yet here I was in a similar predicament. Karma, really, haha. (Though the cream and the white were really quite confusing. Note for the next elections: have red ballot papers).

Hurriedly extracting myself from the situation, I place them all in their respective boxes and have my finger marked (by pen), as a sign that I have already voted. I then head off to my smiling brother who had just finished conducting his civic duty, and together we wait for the youngest musketeer to be done; his line seeming to have stagnated at some point. He is finally done, and together we head home, happy to be done and to be heading back to our eager beds.

As I pen this, we all await the official results however, I cannot help but wonder in what state this peace will find the nation; in transition to a new government, or gearing up for yet another run with the current.  In crisis and chaos, or in quiet peace? I hope and pray for the latter. To read more posts by Anne, click HERE