I will reiterate what I said in my earlier post that there are so many smart people. I have found myself overwhelmed by the... 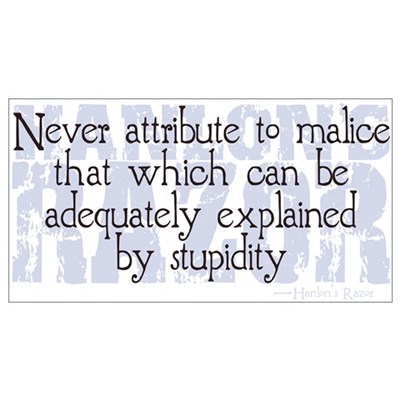 I will reiterate what I said in my earlier post that there are so many smart people. I have found myself overwhelmed by the complexity of people’s minds lately. Let me interject that this is not a bad thing. On the contrary, I find myself so angry at the time I spent in my little cocoon. The time I spent believing that the world that was my own was as big as my scope could get. So today, I met someone who is as expected, amazingly brilliant. We were discussing what it is like to join a new organization when he brought up this phenomenon called Hanlon’s razor.

Hanlon’s razor simply asserts that one should never attribute to malice, that which is adequately explained by stupidity. He went on to speak about how often we walk around with this feeling that someone is out to get us. We believe that if there is an error or an inconvenience, it is because someone knowingly went out of their way to hurt us. Hanlon’s razor asserts that when there is a mistake it is because there was a break in logic and not because someone wanted to hurt us.

Case in point, you are working in an organization and someone decides that Saturdays are working days. Your faith does not allow you to work on Saturdays. You could look at this in two ways. The first way is to hit the roof and complain endlessly about how inconsiderate your superiors are. The second way is to realize that your superior may not know that you do not work Saturdays. This approach would see you have a discussion with them where you would explain your view and what you would prefer; perhaps come to a compromise.

However, we have been conditioned by society and upbringing to silently grumble. We find more solace when we are complaining than when we are actually doing something about us. We feel like we walk with a bull’s eye on our back and we are constant targets. As much as this greatly makes us very paranoid, it also makes us hard to work with. If you want to be a good worker, you have to learn to communicate. You have to constantly speak up and be proactive about your needs and having them met.  “Don’t assume bad intentions over neglect and misunderstanding.”