So I was interacting online with one of my mentors who goes by the name of Mbugua Mumbi who spoke to me about... 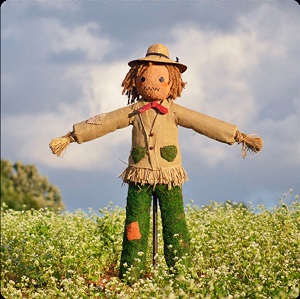 So I was interacting online with one of my mentors who goes by the name of Mbugua Mumbi who spoke to me about a situationw which really opened up my eyes.

For those who have grown up in areas where farming is a major occupation, you must be aware of the problems caused by birds especially querea querea. These birds are small in stature but move around in large flocks and if they descend on a wheat, rice, sorghum or any other small grain crops,  the damage they do is of catastrophic magnitude.

This threat calls for measures to protect the crops. It is naturally difficult to manually drive away these pests taking in to account the acreage of these farms which range from hundreds to thousands of hectares. The farmers have devised an ingenious way of dealing with this menace so up comes the scarecrow. For the uninitiated, this is just a structure made out of pieces of sticks joined together to form something that resembles a human being with outstretched hands. It is then covered with old clothes including a hat. When you are far, it looks as if there are people standing all over the farm so the birds will avoid landing there.

As we have just seen, a scarecrow is not a living thing and poses no harm however, owing to the fact that the birds are not aware of this, they avoid these farms and may even die of hunger. When I look at this scenario, it has a very big reflection on our lives. Many of us have lived a life of “mental slavery.” The fear of  failure, fear of rejection, fear of losing friends and family, fear of upsetting societal expectations has led many people to avoid stepping out into their life’s purpose. They take courses in college they don’t like, go to jobs that they loathe, live in neighbourhoods they are uncomfortable in, and even put up with friends who take more than they add to their lives. All these and much more, are caused by something similar to a scarecrow. It is called FEAR. In fact, fear in many places is taken as an acronym (False Evidence Appearing Real). In reality though, fear is non existent more so, if we decide to take decisive steps towards our end goals in life. So for all of us who have  been imprisoned by fear, step out for your fear is nothing more than just a scarecrow. To read more posts by Mwangi, click HERE

TIPS ON RESPONDING TO JOB ADVERTS – How to increase your chances of making the shortlist.
Next
Loading...
Loading...